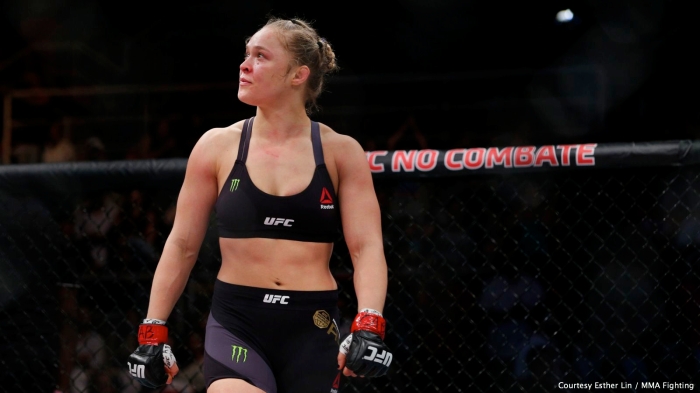 In the main event of UFC 190, that was all six-time defending Women’s Bantamweight champion needed to show the world that she was among the most dominant fighters in UFC history. And, against an opponent like Bethe Correia – an undefeated upstart who had a game that backed up her vicious trash talk – it may have been her sweetest victory.

Despite another dominant performance, there were a variety of circumstances that pointed to an unexpected upset, in the days and months leading up to the event.

After all, Correia, the undefeated 32-year-old, seemed to have the punching power, hot streak (9-0 heading into Saturday) and pure confidence (to the point of obnoxiousness) one would need to take down a Women’s MMA Demigod like Rousey. A close friend of Rousey’s in WWE legend “Rowdy” Roddy Piper had just passed away – a circumstance that would affect even the most steel-focused of athletes.

Pile on top of that the added incentive for Rousey to, as she put it, “take her time in demolishing” Correia – fueled mainly by insensitive comments made in veiled reference to Rousey’s deceased father – and one would understand if she did not possess the clearest of heads entering the Octagon. 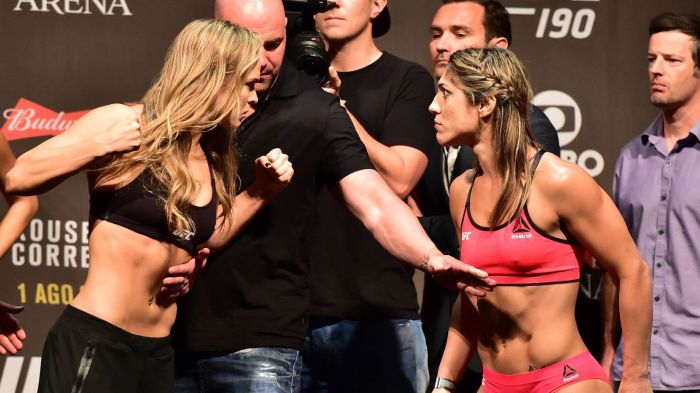 Undefeated Bethe Correia (right) ran her mouth and made things personal for the UFC champion. She paid with a humiliating first loss on Saturday.

It took all of a half-minute to put all of those unfounded doubts to rest. Correia implemented a game plant meant to neutralize Rousey’s most lethal strategy – putting her opponent on the ground and getting a ruthlessly efficient submission. When Rousey failed to put Correia down in the fight’s first few seconds, the hometown fighter had the (very) early advantage.

That’s when Rousey implemented a yet-unseen weapon in her growing arsenal – a stand-up fighting style, matching that of her opponent’s. The champ landed a number of blows before Correia even knew what was happening. Rousey flurried with two match-ending shots – one to Correia’s temple, and a second to her chin – that put the challenger on the ground for good. And with that defeat, Correia’s guarantee that she would “retire undefeated” was rendered a mere pipe dream.

It also vindicated Rousey – teaching Correia a much-deserved lesson for verbally attacking the champion’s family without provocation, and for disrespecting Rousey’s “Four Horsewomen.” Rousey got her measure of revenge on the woman who tried to make things personal – and she relished every moment of it.

That fact was made obvious when a cold-blooded Rousey reportedly said to an unconscious Correia the very same thing the Brazilian screamed at her during weigh-ins on Friday:

At the moment, there isn’t much more to prove for the 12-0 UFC champion. She has dispatched her last three opponents (Correia, Cat Zingano, Alexis Davis) in a combined 1 minute and 4 seconds, and talk of her dominance continues to be compared to the unprecedented run of an undefeated Mike Tyson in the late 1980s.

Rousey’s next bout will likely be a third go-around with No. 1 contender Miesha Tate – the only fighter in Rousey’s UFC career to last more than one round against her. Tate has gained improved punching power since their last bout, and has all but guaranteed that she will regain the title that Rousey took from her in 2012. 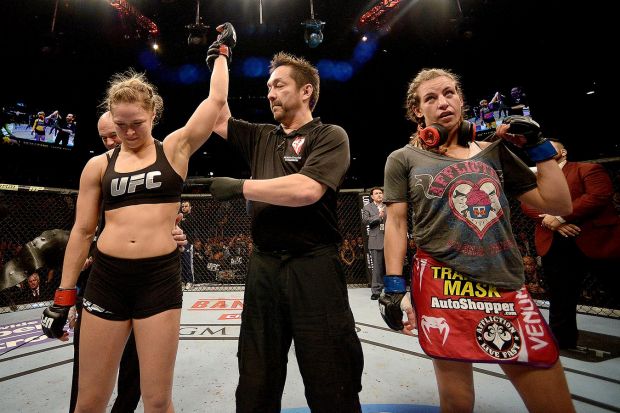 Whatever you say, Cupcake.

But, for Rousey, this victory will be savored. Vengeance was sweet, and the MMA world saw it first-hand – even if it lasted for a little more than a Super Bowl ad.