Many believe the Giants should do all they can to land Phillies SP Cole Hamels at the trade deadline. Should they, and at what cost?

For any Major League Baseball team around this time of year, things can sure get tricky.

The MLB Trade Deadline is coming up on July 31, the buyers and sellers have – for the most part – been sorted out. For the San Francisco Giants, currently standing 0.5 games behind the NL West-leading Los Angeles Dodgers (at the time this is being written), they certainly have the wherewithal to be buyers.

However, this is a Giants team that has overcome many obstacles – between struggling starters and long-term injuries – to find themselves 11 games over .500, and having won 12 of 13 since July 11. Between the hot hitting of guys like Buster Posey, Brandon Crawford and Hunter Pence, and the solid pitching of starters Madison Bumgarner and Chris Heston, it’s possible they could keep their heads above water until September without making changes. They might find themselves with another playoff berth – maybe even a division crown – if the Dodgers can’t right their ship down the stretch.

If you ask the experts though, don’t count on it. That’s why many are contending that the Giants, if they want their first return trip to the playoffs since the 2003 season, should make some crucial moves to shore up a middling pitching staff that used to be their greatest strength. And it doesn’t take a rocket scientist to understand why many feel this way.

After all, between Matt Cain, Tim Hudson, Ryan Vogelsong, Jake Peavy and Yusmeiro Petit, there isn’t one veteran arm that fans and experts alike feel comfortable getting quality outings from, on a regular basis.

So, the front office has done their due diligence: the Giants have reportedly inquired about Cincinnati Reds closer Aroldis Chapman and Philadelphia Phillies starter Cole Hamels – two quality arms that would instantly upgrade the Giants’ bullpen and rotation, respectively. Chapman is the man with the 100-mph arm, after all, and he would provide a more reliable closer for a Giants team, and fanbase, that might be wary about current closer Santiago Casilla in the long-term. 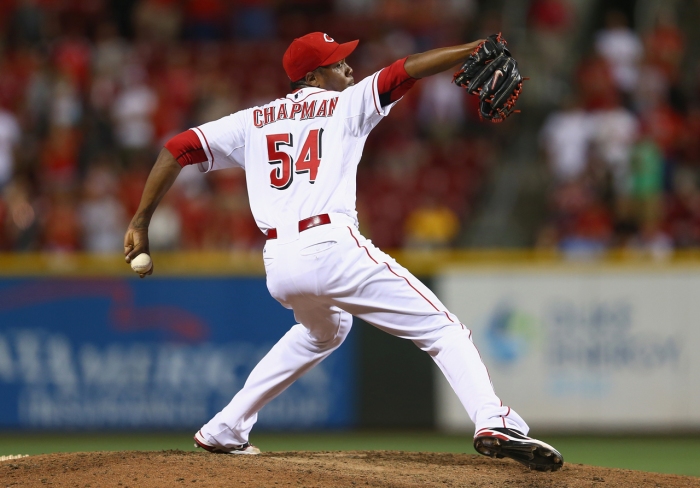 Reds fireball closer Aroldis Chapman has been in many rumors as a trade target for the San Francisco Giants to bolster the bullpen.

As for Hamels, who threw a no-hitter against the Cubs on Saturday, he would likely project as a No. 2 starter behind Bumgarner. This would give the team a very solid rotation consisting of Bumgarner, Hamels, Heston, Cain and Hudson – that is, if San Francisco is willing to part ways with a quality prospect of their own.

But, there’s the rub – in order for the Giants to get an arm like Chapman or Hamels, the Giants would have to be willing to give up a young talent that might prove too pricey. With rumors swirling, it would be likely that Cincinnati or Philadelphia would have their eyes on young catcher Andrew Susac – a talent that many believe is the successor to Buster Posey, when the latter decides to play 1B full-time. Minor league prospect Tyler Beede – the Giants’ first-round pick from 2014 – would also be on their wish list in the event of a trade. He is currently being looked at as a Giants rotation starter as early as 2016, and the front office may not be willing to give him up – even for the services of Hamels or Chapman.

I’m sure there are those that believe that, despite the cost, the thought of Hamels or Chapman in Orange and Black is also too enticing to pass up. But, consider this: the last time the Giants made a costly farm-system, “Win Now” trade happened in 2011 – top pitching prospect Zack Wheeler was deemed a worthy sacrifice when the Giants traded him to the New York Mets for slugging OF Carlos Beltran, hoping to bolster a squad still in contention for a playoff spot in July. Anyone remember what happened with that?

Oh, that’s right – Beltran’s arrival only heralded a dip in offensive production for San Francisco, and, despite going 10 games over .500, the Giants missed the postseason. Meanwhile, Wheeler has served the Mets fairly well in his years with New York – though, he is currently recovering from Tommy John Surgery. The big “What if”? Had he stayed with San Francisco, working with their coaching staff for the last four years, it might have been just another embarrassment of riches for the Giants pitching rotation – something that, ironically, wouldn’t have put San Francisco in the position it finds itself in right now.

Just remember – it’s usually been the under-the-radar moves the Giants made at the deadline (Cody Ross, Javier Lopez in 2010; Marco Scutaro, Hunter Pence in 2012; Jake Peavy in 2014) that helped the most for San Francisco to reach the postseason and – even more important – win the World Series. Ultimately, as the pundits speculate what the Giants might need, the fanbase will remain faithful to the moves Bobby Evans and Brian Sabean make – or don’t make – as the deadline looms.

If there’s one thing the Giants can do, it’s maneuvering through some tricky situations.