Issue: Projecting the San Francisco 49ers to draft Oregon DE Arik Armstead in the first round of the 2015 NFL Draft

With all of the drama and subsequent turmoil surrounding the 49ers’ 2015 offseason, perhaps it can find a brief respite in two months, when the NFL Draft goes live.

Needless to say, with their current free agent and salary cap situations, San Francisco is going to have to hit a home run this year if they have any hopes of contending this September.

Furthermore, anyone with a pair of eyes knows that one of the Niners’ biggest downfalls in 2014 was the lack of a passing game – more importantly, the absence of a true deep threat receiver that could create separation downfield, giving QB Colin Kaepernick a long-bomb target on a regular basis. So, naturally, ESPN expert Todd McShay has projected the 49ers to draft … 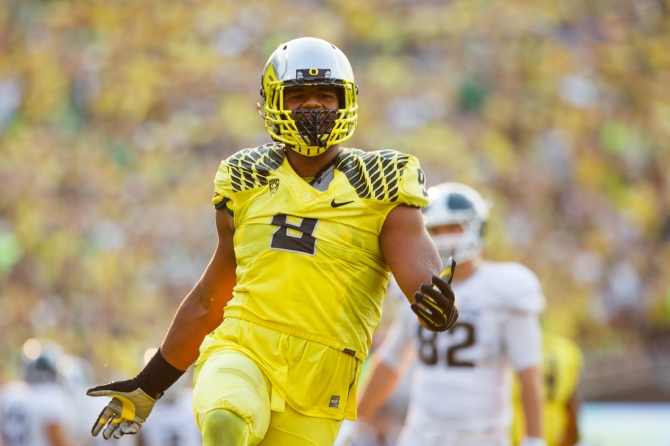 While previous draft projections have given the Niners receivers like Michigan’s Devin Funchess and Ohio State’s Devin Smith, McShay looked elsewhere for the team’s first round draft pick in his latest mock draft – mainly, a defensive line that head coach Jim Tomsula will surely want to reload.

And with that pick, Oregon defensive end Arik Armstead looks to be the man for the job – described as an ultra-athletic two-sport athlete (he also played basketball for the Ducks) with a stunning combination of size, speed and power, the 49ers could insert him into the starting lineup as soon as he is needed, and could be a great complement to pass rushers like Aldon Smith and Aaron Lynch.

But why forego their biggest needs (wide receiver / cornerback) to supplement an already impressive defensive front? Well, the answer’s pretty simple: the status of Justin Smith.

The reliable Cowboy has been a mainstay on the D-line since 2008, and just may well enter his 15th season in the league. While still effective, he has a lot of tread on his tires – so much so, that there have been reports Smith has been contemplating retirement. Whether he does in 2015 or 2016, the defense will need to be ready to replace him.

With that said, it’s hard to argue against this pick. If the defensive coaching staff can cultivate their young talent (including 2013 injury holdover Cornellius Carradine), there’s a chance that, with Armstead, the defensive line – perhaps the team’s biggest strength – won’t miss a beat. This, despite the potential loss of Smith, and the all-too-real loss of disgraced former DE Ray McDonald.

So, apparently, LeBron James’ son has game. Who would’ve guessed?

No, seriously – take a look at this video: 10-year-old LeBron James, Jr. has got GAME:

That was courtesy of his proud papa, after LeBron Jr. led his team to a first-place finish at an AAU tournament in Houston late last year. However, it’s footage like this, apparently, that has college recruiters licking their chops for the prospect of coaching him … in eight years. LeBron confirmed this recently to CBS Detroit in a recent presser:

Yeah, he’s already got some offers from colleges. It’s pretty crazy. It should be a violation. You shouldn’t be recruiting 10-year-old kids.

To be fair, there’s precedent for this – though not to this extent: UConn’s Ryan Boatright actually committed to USC before he entered high school. Marquette’s Matt Carlino and Sonoma State’s Michael Avery had similar offers from big schools before they reached the ninth grade.

But this is a ten-year-old – moreover, this is the son of one of this generation’s greatest basketball players. I understand that he could project to be a very good player down the road, but again, he’s only ten – a lot can change between now and 2023.

On a similar note, it’s enough pressure being the progeny of an NBA player with the raw talent and superstar image of LeBron James (let alone sharing the man’s name) – especially when he looks to take up his father’s profession. You add the national attention and scrutiny thrust upon a child before he’s old enough to learn algebra, and you have to wonder what it could do to someone – maybe even your own child.

No wonder LeBron said this recently about the reports:

Bottom line: yes, the kid is gifted, and yes, he’s the son of a bonafide future hall of famer. But how about we do what his father says, and let him be a kid, before we put all these expectations on him?

Issue: Daniel Orton bad-mouthing Manny Pacquiao – an action that led to his release from the PBA’s Purefood Star Hotshots

Anybody remember that Chappelle’s Show sketch, “When Keeping It Real Goes Wrong”? (Heads up: NSFW Link if you click through …)

But instead of Dave Chappelle, it’s Manny Pacquiao.

Former Kentucky and NBA star Daniel Orton found himself unemployed when he decided to “keep it real” and give an honest – if not untactful – assessment of Philippine superstar Manny Pacquiao, who currently owns and plays for the Kia Carnival. The 6-foot-10 center was fined and released from his Philippine Basketball Association team, the Purefood Star Hotshots, after making disparaging comments about Pacquiao’s basketball game:

What Orton didn’t realize was that he had essentially insulted someone the Philippines considered a national hero. While recent comparisons of Pacquiao to Martin Luther King Jr. have been grossly misinterpreted in efforts to understand the situation Orton put himself in, a better analogy would be something like this: Orton basically insulted The Godfather in the middle of a Corleone Family Reunion – it’s greatly ill-advised.

Was it an overreaction that the team let go of what was likely their best designated international player? Probably. But when the honor of a Filipino icon – and, by proxy, the nation he represents – is questioned in any way, you can’t expect to walk away unscathed. It was a harsh, ridiculous lesson Orton had to learn.

But it was a lesson, nonetheless.

Apparently, a little snafu over an NFL Combine challenge has picked up steam, and now a major sporting company could have egg on its face if they don’t play this correctly.

Except, they forgot someone, who ran faster than all of them.

Former UAB WR JJ Nelson ran a stellar 4.28-second 40 – yet, he is without an endorsement deal or a $100,000 check. And he seemingly did all the right things, too – he realized that, in order to be eligible, he had to run a top-3 40 time in Adidas shoes, so he switched out of his Nikes to Adidas. Then, he signed a waiver form. He figured that would have been the end of it.

Except there was one catch:

Players and friends were calling me thinking I would be dumb enough to turn down $100,000 … I signed some waiver at some point, but I was never given a chance to sign an endorsement deal.

That was Nelson, explaining what had likely caused the confusion.

Obviously, it didn’t help that Nelson, a 5-foot-9, 156-pound prospect who will likely go undrafted, wasn’t an appealing prospect to begin with. It was likely the reason Adidas is still refusing to give him anything, despite him having the fastest time at the Combine – it’s all a matter of marketability.

Ironically, however, the ensuing bad publicity may actually help both sides – after all, the episode is giving Nelson a higher profile at a crucial time before the draft, and Adidas gets its name in the National news. Whether Adidas will take a financial hit because of this is currently unknown.

But, if they can play this right – if Adidas can turn the controversy on its head, and play on the incident in a new, humorous light – this whole thing could be salvageable, even profitable, for both parties.

No matter who was in the wrong, Adidas shouldn’t want to walk away from this looking bad. Either give Nelson a fourth $100,000 prize, or give him an endorsement deal, and capitalize on the free press.

All that said, this wasn’t the most tactful way to go about this whole thing by Adidas. They basically played the “little fish” defense as reason for denying Nelson the money – he of the small frame and small school (which, by the way, doesn’t even have a football program anymore) that doesn’t matter enough to be profitable. It’s a bad look that might cost you consumers … that is, again, if you don’t play your cards right.