This was my first reaction in early July. Honestly, it was a perplexing move – and I wasn’t the only one who thought so. After all, Molina had led the San Francisco Giants to a 40-38 record to start the 2010 season, and a change in catchers at that point was risky. This was especially the case, with a talented pitching staff that featured two-time Cy Young Award winner Tim Lincecum.

Though, the Giants brass made this decision based on a call-up from the AAA squad Fresno Grizzlies on May 29. While he played sparingly in his time with the Giants up until then, the organization entrusted him to be the every-day catcher and clean-up hitter for the remainder of the season. Four months later, this talented rookie is a mainstay in the Giants offense, a San Francisco celebrity, a World Series champion, and, this past Monday, is the reigning Rookie of the Year.

Posey won National League Rookie of the Year on Monday, beating out Atlanta Braves phenom Jason Heyward, twenty first-place votes to nine. Heyward received all the fanfare at the beginning of the regular season, and it came as no surprise to many. After all, the 21-year-old right fielder made quite an impression on hitting a three-run home run during his very first plate appearance. He went on to finish with a .277 batting average, 18 HRs, 72 RBIs and 11 stolen bases.

Posey, however, was that much better. After he was called up, he helped the Giants to a 52-32 record. With Posey behind home plate, the pitching staff oddly didn’t miss a beat. As a matter of fact, the addition of Posey at catcher somehow made the pitching staff stronger, as the season went on. It was under Posey that Lincecum began to find his form, just in time for the stretch run to win the NL West in September.

Then, let us not forget the achievements he reached throughout the 2010 season. From July 4 to July 28, Posey went on an amazing 21-game hitting streak. In that span, he had 37 hits with a .440 batting average, belted six HRs and had 23 RBIs, while the Giants posted a 16-5 record. The only reason his streak ended was the fact that he faced Marlins SP Anibal Sanchez on July 29, who threw a one-hit shutout against the Giants.

Posey also posted a .305 average during the regular season, and posted 67 RBIs – fourth among rookies – in only 108 games. Projected through a 162-game season, he would have potentially posted an impressive 101 RBIs. This was also when, for the majority of his time as an offensive starter, he batted cleanup, giving the Giants their most legitimate cleanup hitter since Barry Bonds. This was demonstrated by hitting clutch home runs against the Cubs on September 21st – the only run of the game – and another 8th-inning home run in the final game of the regular season, to win the NL West Division crown. For his efforts, Posey was named to Baseball America‘s All-Rookie Team, and named Outstanding Rookie by his peers in the Players Choice Awards.

His stellar play continued into the playoffs, beating his Braves counterpart, Heyward, in the NLDS. He further showed his outstanding hitting prowess against the Phillies in Game 4 of the NLCS – he went 4-for-5 with 2 RBIs, adding a game-changing play at the plate, preventing a run from Carlos Ruiz. When the Giants vanquished Philadelphia in 6 games, Posey finished with a .282 average and 3 HRs in the NL playoffs. Posey would meet his mentor, Bengie Molina, and the potent offense of the Texas Rangers, in the World Series. 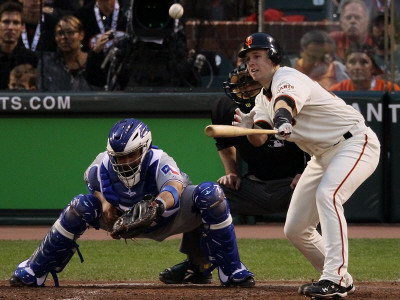 In a matchup of Molina vs. Posey, the pupil got the best of his mentor.

When all was said and done, Posey helped lead the Giants’ stellar pitching staff behind the plate – and helped the Giants offense deliver key blows to the Texas Rangers’ pitching staff – on the way to a World Series title. He finished the World Series with an impressive .300 batting average, 2 HRs and 3 RBIs, as well as the distinction of being only the fifth rookie catcher to win a World Series.

With his Rookie of the Year award, Posey joins Giants legends Willie Mays and Willie McCovey as one of five Giants to be bestowed with the honor. While he started as a possible project prospect with a team teetering between the playoffs and an early offseason, he became one of the most impressive position players in the major leagues. Now, with the award officially under his belt, what’s next for the San Francisco superstar? I think he said it best when he was asked, shortly after winning the World Series, what he could do top his accomplishments next year.

With the staff of fireballers at his disposal, it will be a pleasure to watch him try again.